You have no items in your shopping cart

Close
Swipe to the left 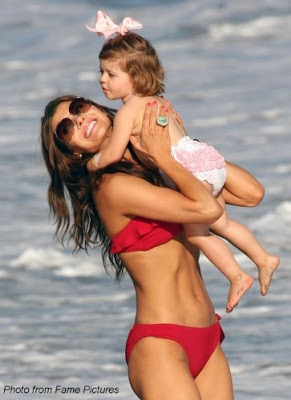 We were pretty excited when we received an email from Kelly (one of our RuffleButt model moms) informing us that she had just spotted RuffleButts on TMZ! Turns out Ali Landry and her daughter Estela were out playing on the beach when the papparazzi got a few shots. They best part is, Estela was looking absolutely precious in her Swiss Dot RuffleButt Bloomers!! I mean seriously, Ali is one hot Momma (I must admit I am a little jealous of that killer body) and her daughter could not be cuter!

I actually met Ali out in LA at the Pre-Golden Globes Gifting Suite in January of 2007, just after launching RuffleButts. She was super nice as we laughed about the stories of our own 'rufflebutts', having grown up in the south. Well, I grew up in KY, but it is more south than many of the states beneath us! Anyway, she told me that her daughter loved her ruffled bloomers and now ours would be the brand of choice! So, it was very fun for me to see Estela having a blast in her RuffleButts a year and a half later!

We found the pictures all over the internet including TMZ.com and iBabyCouture, among many others. We are crossing our fingers that they make it into one of the weeklies, but I am completely honored either way!